We are often so preoccupied with the next thing, thinking about the future, problems with work or family, planning travel, visits and so on that we can forget what we have already achieved. I was recently showing some pictures and talking about the project, which made me think it would be good to look back and reflect on what has happened over the two years or so since I became involved with those courageous people who were trying to do something about their situation.

Here they are when I first met them in 2006 with nothing else but a determination to help those children in their community. They had nothing to work with, hardly even a place to sit. There were 28 children and three adults, Evariste, Thamarr and Faustin, who has since left to work on another project. They were in a small room with no facilities, no place to play.

Now, there are 124 children, soon to be 150+ in January, in a building which we own, with six staff, having done training on active teaching methods, provided materials and equipment and started a feeding programme. Supporters from Britain pay for uniforms, which are the only new clothes the children have ever worn. The children are achieving very well, attendance is high, parents are happy, teachers and assistants feeling fulfilled, knowing they are doing a good job and that they are supported.

In January 2007 I met with a group of local people and listened to their stories. Many of these womenwere working in the sex trade as they had no other means of earning a living. Their problems were so many it seemed an impossible task to do anything worthwhile and sustainable for them. We began with training in hairdressing and gave some of the women money to start a small business, thanks to the Charlotte Wilson Fund. Some now sell vegetables, one woman bought goats and will now sell goats as they produce babies. Others, now in a basic literacy group, help each other by donating a small amount of money each week to be given to someone in the group in turn to use as they need.

The tailoring project has also been a great boost to us also. Supported by Globalgrassroots, we have started the classes, which will last 6 months for each course and will give the people a real chance to earn money regularly. 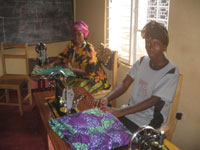 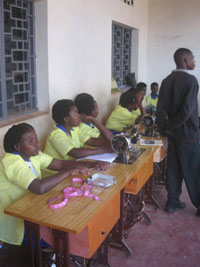 To pay their teacher they make and sell bags, some of which are in Europe and America now, thanks to willing salespeople! They are also slowly finding markets locally too, which is very important as they develop their independent business contacts.

Some people are making jewellery and they too are building up contacts to sell their products.

Finally, this time, I would like to share a story with you. Traditionally here, teachers stand at the front of the class, dictate or instruct the children, who are asked to repeat and repeat again lessons and facts which they are required to memorise. I have spent a lot of time with the staff talking together about the nature of learning, the importance of play, of using tactile materials, of giving the children opportunities to talk things over and contribute their own ideas. I have brought materials and equipment from the UK to demonstrate. 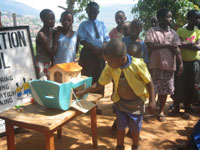 One of the things some friends brought over for me was a Noah’s Ark model. I showed it to the children and Evariste explained the story, while I invited the children to put the animals into the Ark. Some of the animals – panda, tiger, etc were not recognised by children or adults as they had never heard of them, nor seen books with pictures. The children were very attentive and curious. They have learned to treat the equipment with great care, as they know they are special and we need them for future classes.

Some days later, I arrived at the school and I could not immediately see Evariste and his class, who work on the verandah. I could hear them as I approached, I could see the desks and the board, but not the teacher or the children.

As I reached the verandah I spotted them. They were sitting on mats on the floor and Evariste was telling talking to them about animals of different kinds. The children were handling them and talking about them to each other. It was lovely to see. 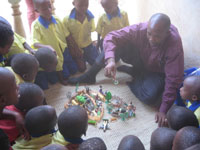 They were using some models I had brought for them, some of them given by people in the UK. The relationship between teacher and class was wonderful, full of respect and very relaxed. The children were fascinated and afterwards drew some animals themselves. I told Evariste that I thought it was a great lesson and I was sure the children would remember the things he had told them. I asked him how he felt.

“Me? My self esteem is very high Meg. I am very happy today because I know my students will remember this lesson” he said. 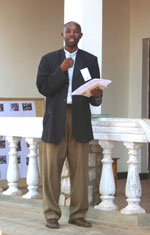 Another word about Evariste. The picture below on the left was taken 18 months ago. The one on the right, very recently, when the boys interviewed him for the programme they were making for Radio Cumbria. I am sure, like me, you will notice a difference in him also.

The project has changed beyond recognition and we talked about this just before I left. None of us could have imagined that we would have achieved so much. In the beginning it seemed the needs were overwhelming and the little we could do would be so ineffective. How wrong we were. Evariste and the other staff have worked tirelessly and have taken on so many new ideas. Together the adults in the project have formed a very strong bond and that community is building itself into something very precious, and they know it. Now, as Evariste says, they have hope – no money can buy that. They have done this for themselves.

But, as I always say, they have done it with your help. Without it they would not be able to dothese things. We have work to do yet to make this project self-sustaining. We will be adding classes to the school and researching ideas to help the youth in the community, especially the young men, who are very much marginalised.

So, watch this space! And thank you, thank you so much for your continued support, both financially and through words of encouragement.