I am now in Kigali, busy as ever, but Sunday the 17th was a day to really enjoy. I hope you like reading about our very own rugby tournament.

Best wishes to you all, and thank you for your continued support for us, we cannot do anything without you,

What an exciting day we had on Sunday October 15Mth – never mind the 6 nations, we hosted our very first intergroup rugby tournament. Groups from around Kigali came for the contest. It was due to start at 2 p.m.

I was busy catching up on some things in the office around 11 a.m. when the first team arrived. They had come from Kagugu – a pretty long walk, probably taking around an hour and a half, even more. Our kids drifted in, more teams from other areas came and they all went out onto the field with our coach around 1 p.m. Vianney, our coach, had divided loyalties because he also coaches a team known as the Sharks – well- named for their fine predatory attacking play I must say.

Those of you who know me well will understand when I say I was as excited about this tournament as when I went to see New Zealand play Tonga in the UK This means so much to me, as a teacher I know the value of sport for every child – for these children, living as they do it is their moment in the sun and a win is all the better. No matter, team-work, helping each other, honing your skill, increasing in confidence, all is worth the effort.

We did indeed start at 2 – ten teams were competing. I took a board up to the ground with me and some chalk to note the scores, the players often came to check the scores and to see who might be in the final play-off.

It was SO dry, clouds of dust choking us most of the afternoon, so I apologise for the quality of the photographs. I have tinkered about with them but they are not of good quality. However, I hope they show the spirit of the day.

We fielded 5 teams, mixed boys and girls. Only a couple of the other teams had a girl in their squad. They decided if girls scored a try that was worth 2 points. Who was I to argue, some of our girls are utterly ferocious I am proud to say! And they scored tries!

Here MF 1 and 2 are warming up, plus the rest of our teams, all shapes and sizes are on the sidelines – endless enthusiasm and boundless pride. 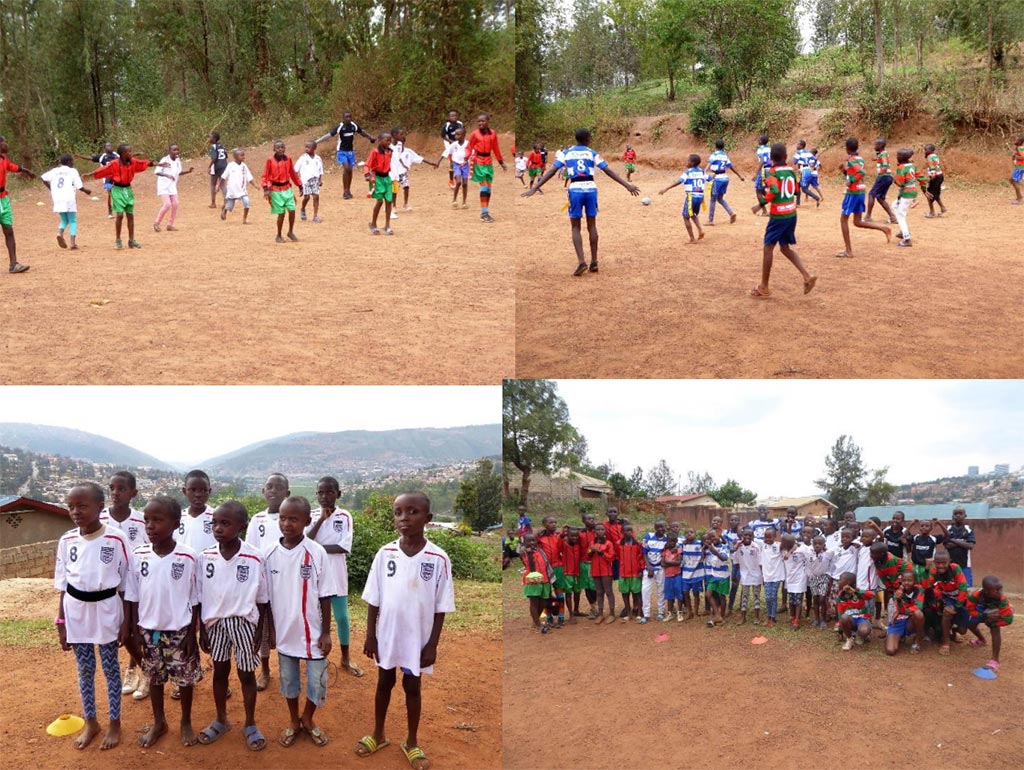 So sometimes other teams got the better of us, sometimes we gave teams with much older players and no girls what can be described as a thrashing – 6 – 0 for one game I seem to remember!

There was some spirited play and some amazing skill. Many of the players were in bare feet or flip-flop sandals. Very few injuries, no bad humour, all respecting the referee – perfect! A group of local people came to watch in bemusement, they seemed particularly interested in the antics of the grey-haired muzungu enveloped in dust occasionally getting up to cheer for a try! 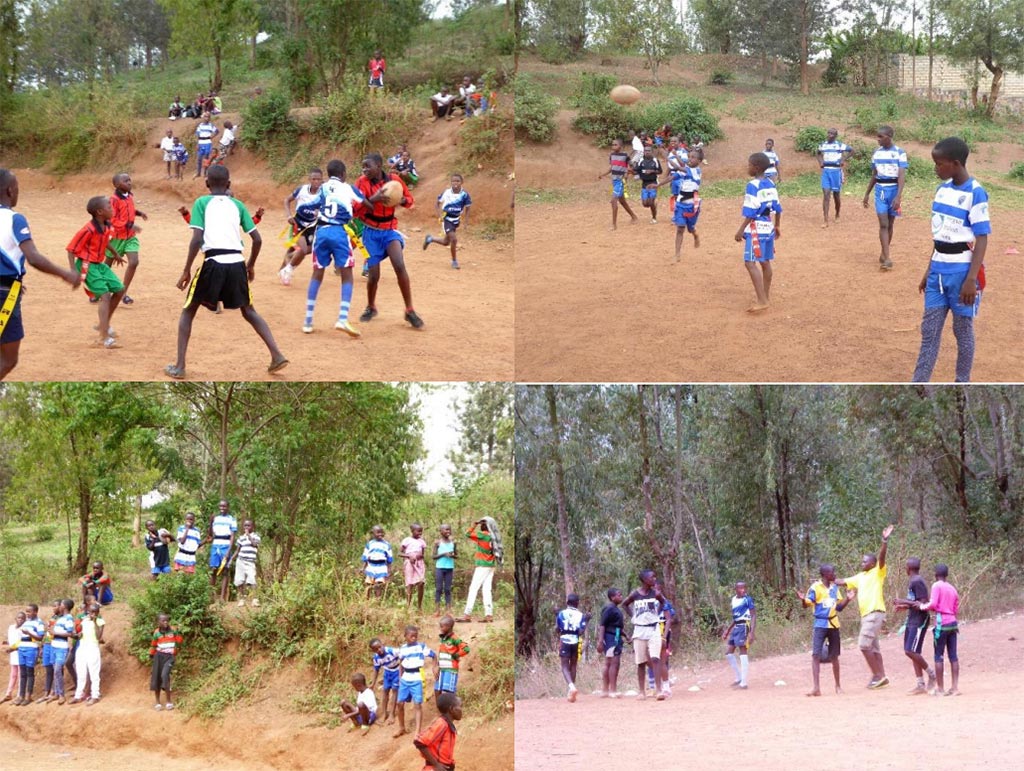 So after three hours or so, 150 litres of water drunk, the winners happened to be the team who arrived early at 11 a.m. It was the first time they had won a trophy, they were just ecstatic and so was their coach who surely would not be able to speak for the next few days.

One of our teams was an honourable third and the player of the match was our very own powerhouse from Primary 3 – totally unfazed by the bigger opposition, he was a true star.

We live on to fight another day, we are off to another, bigger tournament a bus drive away in Muhanga – wish us luck – and we have invested in boots for everybody, we practised playing in them yesterday – Muhanga, here we come! 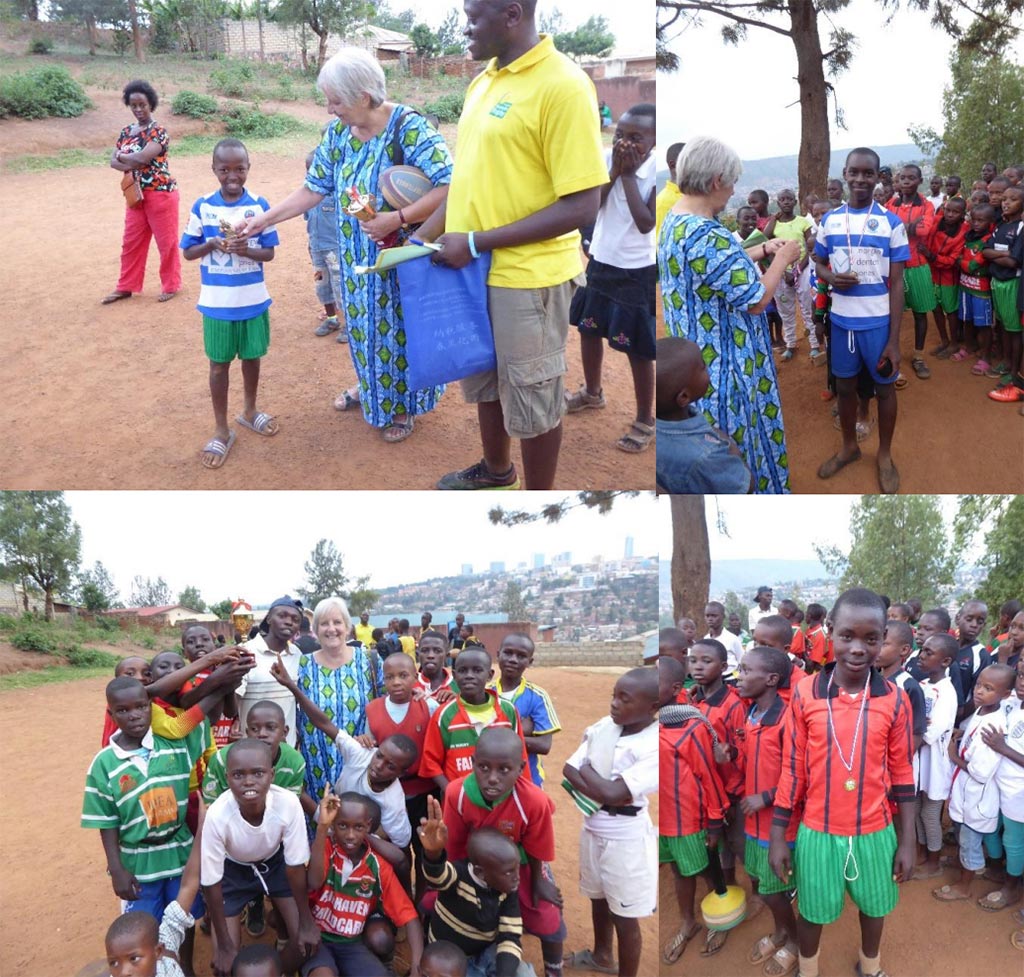 One of the best of days – big thanks to Kamanda and to Vianney for their hard work in establishing rugby in Rwanda and huge thanks to Friends of Rwandan Rugby – without them none of this would be happening.

We are proud to be part of it.

Peace, love and happiness to all, Meg