Something I have rarely written about but which is a very important part of the project is the work we have done with adults and young people. This, like the nursery, has grown over the years from the first meeting I had with a group of local people in January 2007 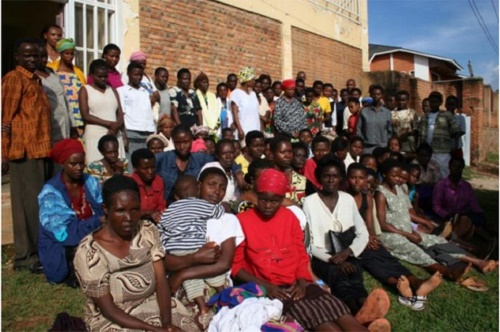 We held a meeting where some of the local people gathered to talk about their hopes and needs. Most of them were unemployed, all poor and some extremely vulnerable.

We decided to hold another meeting with seven representatives elected by the group. At that meeting some asked for help with basic education, some asked for help to find them something to do to earn money to feed their families. They had several ideas of what they would like to do.

We had a very limited budget and a plan had to be formed. We began with a hairdressing class for 50 women. We bought a materials pack for each person and found a teacher.

Some of those women went on to work in salons, in the markets or from home.

The next thing we started over 2007/8 was our tailoring classes, supported by the Global Grassroots organisation.

This enabled 90 adults, mostly women, to learn tailoring skills over a 6 – month period.

They began by making and selling fabric bags to raise the money to pay the teacher and we still make many of these bags for sale in Rwanda and the UK.

Receiving a certificate is the source of great pride and the clothes worn for the occasion demonstrate the new skills learnt.

This training gave the people an opportunity to earn money for themselves. Some formed small groups to work together or work from home or in the market and one now has a thriving business employing four people. Four women work here at the project in the sewing room. Over time their skills have grown considerably and they now make items of high quality which are sold at the Gisozi Memorial Centre or are brought to Britain to sell. The profit we make in Britain goes to the increasingly higher cost of the food programme.

Many of the people in our community, particularly the women, have not had the opportunity to go to school. A large majority of women can neither read nor write. This increases their vulnerability in that they are dependent entirely on others for information. We have run several classes for basic literacy and numeracy and are registered with the authorities, using their published materials for the courses. To date we have held classes for 98 people, mostly women. Some of them have continued their connection with us as you will see below. Many of the participants are parents or grandparents of children in the project.

The presentation and receipt of the certificate for the completion of the course is a very important occasion.

The literacy classes are currently not available due to lack of space.

At the end of each of these classes it was clear that the women had enjoyed the classes very much, not least in the forming of new friendships and support groups, but because it gave something of real purpose to their lives.

Some of the women have subsequently asked us to find them something to do in the afternoons, hopefully to enable them to learn a skill to make something to sell – could we find something for them to do?

We employed a teacher to teach the first group how to make necklaces, bracelets and ear-rings from paper. The beads are made from strong paper, varnished and then sorted into colour combinations to make lovely items. Over time the women have created beads of different designs, creating some beautiful things.

We recently had some fun combining the skills of the tailors with those of the bead – makers to make a new style of bag.

A new group of literacy graduates formed a group to learn how to make baskets. We paid the teacher and bought some materials. Baskets are made from grasses, some hand dyed to make the colours. It is a long process to make one, each row stitched into place.

Most of the women have children in the nursery, they gather at the project each afternoon. It is so good to hear them having fun together, sharing stories and giving help and advice to each other.

Basket-making is a traditional craft and there are regional variations. In the past they were used for storage, as these in the King’s Palace Museum and they are almost always a feature at weddings or are used to take gifts on a traditional family visit.

Over time our group has developed skills and they make some beautiful baskets in a variety of patterns and colours.

Over time we have also held some classes, run by volunteers, in English for women and for young men. Things are changing now and we are more likely to see mixed classes and English is very popular.

Since 2007 we have given training and skills education to around 300 people, many of whom are now earning a little money and are able to live with greater dignity, which means a great deal to us and even more to them, bringing some laughter, companionship and confidence to their world.

My best wishes to you all, Meg