At the end of a very busy year I thought you might like to read about a few people we are helping at the project and how we are making a difference to their lives.

First, the boy who fainted in class two years ago because he had not eaten over the weekend and whose condition gave us the incentive to start the feeding programme. He is from a poor family and he is one of the most intelligent children I have met. He particularly enjoys language and speaks English very well. He sometimes comes to school at the weekend to read the English story books in our library. He wants to be a doctor in Australia. I feel sure he will realise his ambition. He has been first in his class for the last three years. 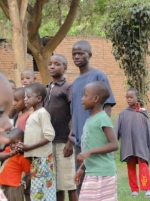 Second, a boy who was orphaned in the genocide. His mother was killed at her home when he was a small baby and his father, a soldier, was killed in the fighting. He was taken in by an elderly neighbour and, when she died, by her daughter. He is not aware that this lady is not his mother. Only partially educated he joined our women’s literacy class last year. The teacher, Tamar, noticed he was intelligent and keen to learn and asked if he could come to school in Primary 3. Although he was older than the other children he quickly settled in and developed very quickly, finishing second in the end of term examinations. We are paying for him to go to a local primary school from January and since he will be going only for half days will be coming to us for the rest of the day for extra English and other studies. He wants to be a General in the army! He has a lovely sunny smile and he always works hard – now he has hope and I feel sure he will succeed.

Third, a girl who was raped on the way to another school last year and who gave birth to a baby boy when she was thirteen years old. She too joined the literacy class and then joined the Primary 3 class. She is a bright girl who is an excellent dancer and she wants to be a singer. She was third in class and we are paying for her to go to a local primary school in January. She is now a happy confident girl who has a real chance.

Then there is Felicie, who, along with another assistant in the school, is being sponsored to attend school herself after work in the evenings. At the end of next year she will be qualified to teach in Primary School. We have so much to celebrate and have achieved so much in a comparatively short time. Finally I want to wish the students of Leeds University the very best of luck at their Rag Event in April next year. Their aim is to get as far away from Leeds at no cost – having a great deal of fun and raising money for us at the same time – you can find out more by following the links below. Good luck guys, we need all the help we can get!!! 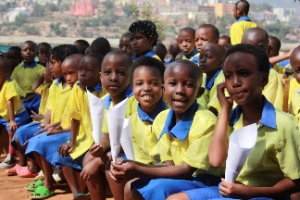 On behalf of the students, the staff and the people of Kinamba I thank you most warmly for your continued support and I wish you all a Happy Festive Season and all the good things you would want for yourselves during 2011.

Thank you to Kirstie, Irene and Alex for the photographs.