News about an exciting project for our March edition

We are very lucky with our volunteers and we were thrilled when Rosas asked if we would like to do a photography project. It was a wonderful opportunity for a small group of people to be creative and possibly have a chance to earn some income in the future. The group met for eleven sessions and had a great time. Here are some extracts from the report which Rosas wrote.

We looked at newspaper photos and each person had to pick out one photo and say why they liked it. This resulted in us considering:- Colours, composition, interest, space, tone, perspective, shapes and patterns, humour, the creation of mood, conveying beauty, strength and wisdom, gives information and images that prompts you to ask questions.

Toussaint volunteered to be our model when considering perspective.

After discussing images, their meanings and messages the group talked about taking more natural and fun images of people.

After further experimentation with digital cameras the group members were each given a disposable camera to take photographs of their choice. Rosas developed these in preparation for the next stage.

In session seven and eight Rosas and the team put the work on a series of pizza boxes to display in the office.

The students made frames for the photos.

One person articulated the strength and closeness of the group when he said “This is my family”. It felt that we had shared a lot together and talked at length about family and friends, fears and hopes. My frustration was always that I missed so much because I did not share their language but I was very grateful to Mary for the translation and for 2 of the students who spoke English whenever they could.

The cameras were left at the project but I brought the memory cards and more disposable cameras back to the UK as it is so much cheaper to print them here. The film cameras were given to Toussaint who had shown a lot of talent and the group agreed for Jean Bosco to have the other. These young men were given a film and 4000 Rwandan shillings to pay for development. They were asked to keep a record of their transactions and I look forward to my return mid May to see how they are progressing with their photography ventures. We also have been asked to put on an exhibition of our work in one of the hotels. Rosas Mitchell 22/04/2010 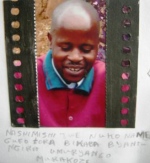 On behalf of the photography students and the Kinamba Community Association I thank Rosas for her inspirational hard work and enthusiasm which has brought such fun and given the students a great opportunity. I am sure she will be thrilled to know that Toussaint and Bosco have been out and about taking photographs as they each start a small business.

Rosas has plans to continue with this project and has offered to run an art project when she returns to Rwanda later this year. We look forward to seeing her and working with her again soon.

Our best wishes to all our friends, wherever you are.